Have you ever been in the situation where someone whose taste in books you respect and generally agree with recommends a book that you have seen from time to time and you've always thought it looked just "Meh" and then you finally read War Dances which is by the same author and it's amazing and funny and sad and you think, why didn't I read The Absolutely True Diary of a Part-Time Indian, like, three years ago? No? Is that just me?

Well, if you haven't read Sherman Alexie yet, you very seriously should. I mean right now. Please, go find a book by him and read it and then you can come back and finish reading this. Alexie is that rare talent that combines comedy and tragedy. He writes with so much honesty that I feel as though every story he tells is his own.

The Absolutely True Diary of a Part-Time Indian is the story, told in first person of Junior, a Spokane Indian who has lived his whole life on a reservation. At the age of fourteen he decides that he will be the first person from his reservation to go to school in the neighbouring town, a predominantly white, farming community. Alexie cheekily points out that the only other Indian in the school is the mascot. Junior is a cartoonist and his artwork is shared in the novel through the art of Ellen Forney (the copy of the book I read had a really interesting interview with Forney at the very end).The art highlights Junior's thoughts, fears, and how he really sees those around him. 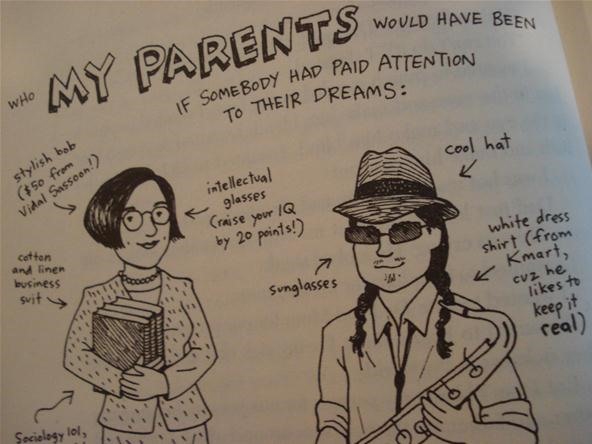 Check out more of Forney's work on her website ellenforney.com

Alexie's short novel takes us through a variety of perspectives on First Nations people in America. This quote encapsulates so much of what Junior struggles against:

The novel is what they call "semi-autobiographical". (I don't know who "they" is. Literature profs?) That means that when you go to Sherman Alexie's wikipedia page and read about his childhood, it sounds like a synopsis of this novel. Alexie grew up on the reservation that Junior describes in the book. If anyone's able to talk about poverty and alcoholism and Indians on reservation, it is Sherman Alexie. Perhaps because of that (though also because he's a strong and honest writer) Alexie gets away with saying some fairly brutal things. He strips the American Indian and the reservation of whatever romance the reader may provide it. One of the funniest scenes in the book comes during a funeral when a wealthy, white man shows up. The disparity between what the world wants Junior's reservation and people to be and what it truly is, is demonstrated with humourous and frustrating clarity. Alexie uses his personal history and his background to say things many writers couldn't get away with. Yet at the very centre of this novel is a story of a young man who wants to fit in, who wants to know that his life has greater meaning than what he's been shown so far and that's a pretty universal story.

So what's the problem? This is a young adult book that won't make it into very many high schools. The best case scenario I can envision is a copy in the library; we're not going to see this book on curriculum anytime soon. The book contains a few racial slurs – terrible things that Junior is called – and some violence, as well as the inner workings of a teenage boy's mind (ie: sexual thoughts). Not every teenager is going to be mature enough to handle the content here so while I understand why a teacher might not assign this novel to a high school English class, it is one that the smart teenager should read. The smart adult too.

You can do it