I loved The Amazing Adventures of Kavalier and Clay for so many reasons. For its fantastical sense of adventure, set against the real world action and tragedy of the Jews in Europe during World War Two. I loved the opening chapters of Josef in Prague – a city I spent several months in a few years ago and one of the most beautiful places I've been. Reading scenes set in Prague and descriptions of places I've seen made the story that much more personal for me. 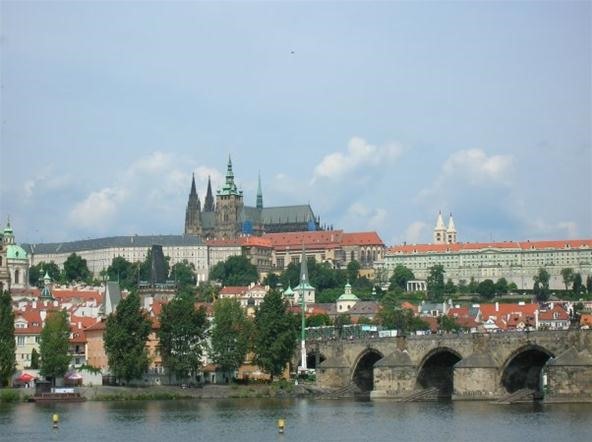 The majority of the story takes place in New York city, a place I haven't visited, but that comes alive on the pages of Chabon's book, particularly the iconic Empire State Building.

The friendship and partnership between Josef Kavalier and Sammy Clay was interesting, funny, and believable. Chabon creates a real friendship that the reader cares about without slipping into sentimentalism. The story balances between the two main characters with perhaps a bit more emphasis on Joe Kavalier. Which I was okay with because he was the more interesting character to me. He's talented and conflicted and the novel does a tremendous job of showing how the circumstances of Joe's life change him from who he really could be or the life he could have had.

Over and over again there were descriptions, scenes set, and moments rendered that drew me further and further into the world of the novel. In the last half there is a scene where a character is so distracted by her shock and excitement that she starts to cook dinner in her underwear, not realizing she hasn't finished dressing. It's a funny but really quite sad moment. The fact that she can only calm down by working, by immersing herself in a fictional world of her own creations, tells us everything we need to know about her character.

Considering this is a book about comics and art, I would have loved it if there had been, scattered through the novel, some examples of comics and art. I would never say this with another book – but it actually felt like those touches were missing here. There are a couple of occasions where the novel gives us a descriptor of the comics that Kavalier and Clay write. While stylistically well done and entertaining, it seemed like a missed opportunity to demonstrate the artistic form that the novel is all about. A classic example of being told when I'd rather be shown.

In all though, if this is what Michael Chabon writes like, I am definitely reading more by him.

Sammy had loved the [World's] Fair, visiting it three times in its first season of 1939, and until the end of his life, he kept one of the little buttons he had been given when he exited General Motors pavilion, which said I HAVE SEEN THE FUTURE. He had grown up in an era of great hopelessness, and to him and millions of his fellow city boys, the Fair and the world it foretold had possessed the force of a covenant, a promise of a etter world to come, that he was later attempt to redeem in the potato fields of Long Island.

On life after World War Two:

"No," she said. "I don't think he's out of his mind. You know? I just don't know if there's a sane reaction to what he…what happened to his family. Is your reaction, and mine…you get up, you go to work, you have a catch in the yard with the kid on Sunday afternoon. How sane is that? Just to go on planting bulbs and drawing comic books and doing all the same old crap as if none of it had happened."